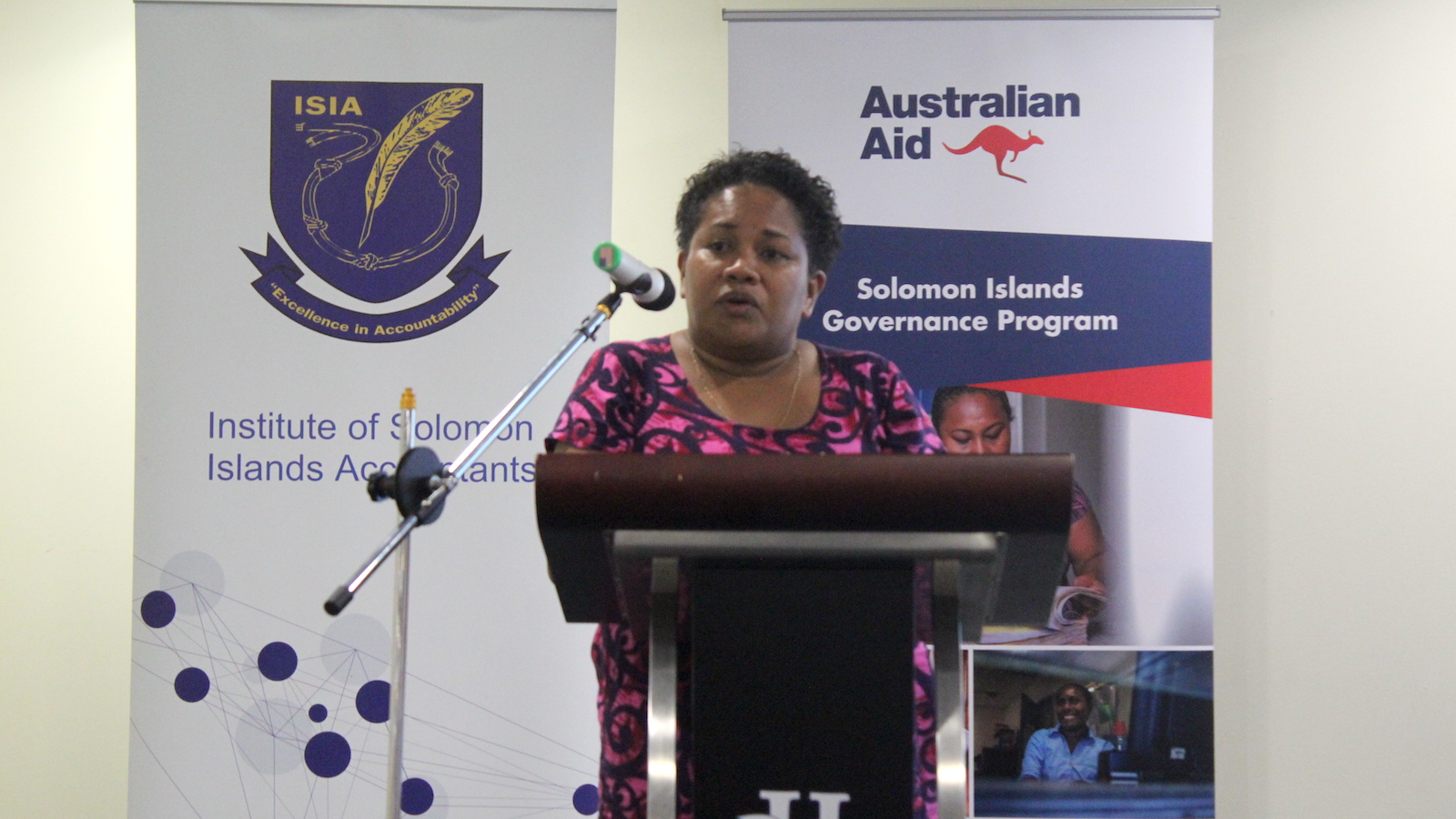 (ISIA): Determination has been identified as the key ingredient for women’s success in the workplace.

This was revealed at a recent networking event for women in the accounting profession, hosted by the Institute of Solomon Islands Accountants (ISIA) at the Heritage Park Hotel.

The event’s theme was ‘leading and inspiring’ and featured presentations by four leading women in private and public sector management roles.

Their presentations centered on their own experiences and sought to inspire and give professional advice to younger women starting out on their careers as accountants and auditors.

All four presenters identified determination as the attribute that made balancing work and family life possible – the secret gel that held both aspects of their lives together.

Malina Ilala emphasized this point in her opening presentation at the event, describing how determination was the key factor behind her ability to cope with work and motherhood.

Ms. Ilala holds a Masters Degree in professional accounting and is a member of CPA Australia and ISIA. She works as Audit Manager for the private accounting firm, Morris and Sojnocki.

Speaking on her experience as an accountant and in particular, the challenges she had to overcome, Ms. Ilala advised young women to be passionate about their work.

“Love your job, don’t do it for the pay or for the look”, Ms. Ilala said during her presentation.

Mrs. Lilly Lomulo, supported Malina’s statement on determination describing it as a necessary foundation for other achievements.

In her lively presentation, the Human Resources Manager encouraged the event’s participants to get out of their comfort zones and to be more involved in their workplace activities.

“Don’t be a statistic, be visible put your hand up and get noticed”, she advised the young women.

Mrs. Lomulo said women should also be proactive, research orientated and constantly seeking to update their work related knowledge without being told to do so.

She described these traits as important to staying relevant while building self-confidence and ultimately, resilience.

On a more personal note, Mrs. Lomulo encouraged the women to be at peace with themselves, embrace change and to always do things to the best of their abilities.

Drawing on her own experience, Mrs. Wate highlighted the barriers faced by women in the workplace and the necessary characteristics and traits to overcome them.

Perseverance and patience were singled out as key attributes for success.

Mrs. Wate described cultural and social attitudes as potential barriers to women’s progress in what is usually a male dominated workforce.

She said such attitudes often led to women feeling isolated, vulnerable and sadly, inferior to their male counterparts.

But she said these barriers can be overcome with pure grit, a positive mindset and the ability to remain calm throughout life’s various challenges.

The final speaker’s story had determination and grit written all over it.

In an emotional presentation, Mrs. Areau Hivu gave a remarkable account of how she was able to navigate through seemingly impossible odds to be SINPF’s current Internal Audit Manager.

With a career spanning some 34 years, Mrs. Hivu was perhaps, the most experienced accountant at the women’s event.

However, her impressive career was almost cut short before it even got onto a firm footing.

Married while juggling a full time job at the Auditor General’s Office with her tertiary studies, Mrs. Hivu temporarily left both to give birth to her first child.

At that point, Mrs. Hivu could have opted to cease her education or employment due to the mounting pressures she was facing.

Instead, Mrs. Hivu embraced all these roles to graduate with a Certificate in Business Administration in 1988.

From there, it was no looking back for the Wagina woman who rose in rank as an accountant to the current management position she holds today.

This can do attitude saw her later achieve a Diploma in Business Finance and then a Bachelor of Commerce Degree from New Zealand’s prestigious University of Otago.

How did she do it?

Determination, commitment and giving her best, were the three ingredients to her recipe for success, shared with women at the networking event.

In a separate interview, ISIA’s President said he was not surprised that determination was mentioned constantly during the women’s motivational talks, given the greater odds that they face.

“As mentioned by one of our presenters, women have a much lower career starting point due to workplace attitudes and to the added responsibilities of family commitments as mothers”, Mr. David Dennis said.

But he said that the success, as demonstrated by the events speakers, comes from the courage and determination shown by local women to progress in their own professional growth despite the added pressures and responsibilities.

“ISIA can support both our women and members professional growth through its professional development programs which is central to ISIA’s strategy and change agenda” he said.

The women’s networking event is the brainchild of the ISIA Secretariat’s CEO, Mrs. Pamela Alamu.

A qualified CPA accountant herself, Mrs. Alamu has been a constant voice in advocating for more women involvement in decision making roles.

Speaking as master of ceremony at the recent event, Mrs. Alamu said she and ISIA hoped the women’s networking events would act as platform for information and inspiration to young women.

The network seeks to build women leaders in the accounting profession.

The CEO was an influential figure in the setting up of the women’s inaugural event in July this year and has been a driving force behind its continuance.